<
>
Erin is one of the most iconic models of her generation. Throughout her career she has appeared on many front covers from Vogue and Numero to i-D. Advertising campaigns include Chanel, Givenchy Donna Karan, Valentino, Armani, Versace, Anne Taylor and Dolce and Gabbana, to name but a few. Always in high demand, in one month alone, Erin appeared in British Vogue shot by Tim Walker, US Harpers Bazaar with Julian Broad,Self Service with Magnus Unnar and Another Magazine with Nick Knight.
​
Forever busy, Erin also features in the haute couture seasons, working with names including Jean Paul Gaultier, Valentino, Yohji Yamamoto, Giles Deacon and John Gallianoat Christian Dior.

Erin has recently received an MBE from the Queen for her services to fashion and charity. 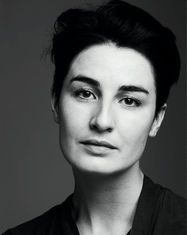 Erin O’Connor grew up in Brownhills on the outskirts of Birmingham and dreamt of becoming a ballerina. From an early age her unusual height and striking looks set her apart from the other kids and in 1995, a chance encounter at The Clothes Show Live meant that the course of Erin’s life changed forever. After a whirlwind trip to London where she signed with Models1, Erin said goodbye to the place she called home and ventured off in the direction of her destiny.

Within just a few months she found herself working with Richard Avedon on the Versace campaign. Aged 20, Erin met Jean-Paul Gaultier, a unique friendship was born and he has entrusted her to realise his vision both on the catwalk and in advertising campaigns ever since. “She isn’t only a model. She is quite like art. She is like theatre. She is an extraordinary inspiration” – Jean Paul Gaultier, 1998. But it wasn’t until hairdresser, Guido Paulo, cut off her hair in 1999, that Erin truly found her confidence as a model. She was reborn an accidental anarchist - untouchable and fierce looking with half a shaved head.  In reality her new suit of armour helped to conceal the still ‘shy girl’ within, something she was keen to protect. 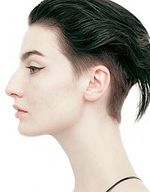 Her background as a classically trained ballet dancer has enabled her to fully immerse herself into the many varied characters she has portrayed, from appearing on her very first front cover of i-D magazine by Juergen Teller to shooting the Versace campaign photographed by Richard Avedon.

Karl Lagerfeld described her as “one of the best models in the world” With that she became his muse and worked with him on various Chanel advertising campaigns and collaborations over the years. Throughout her career she has appeared on many front covers from Vogue and Numero to i-D. Advertising campaigns include Chanel, Givenchy Donna Karan, Valentino, Armani, Versace, Anne Taylor and Dolce and Gabbana, to name but a few. Always in high demand, in one month alone, Erin appeared in British Vogue shot by Tim Walker, US Harpers Bazaar with Julian Broad,Self Service with Magnus Unnar and Another Magazine with Nick Knight.​

Fashion Illustrator and co-conspirator David Dowtown held an exhibition featuring line drawings of Erin, the first time an exhibition of its kind had been devoted to one model.

Her great British claim to fame is being the only non-royal face to appear on a first class stamp shot by legendary British photographer Nick Knight.
​
Erin is very proud to have launched her first range with friend and stylist, Kate Halfpenny. "She Died of Beauty" is a fair-trade cotton t-shirt and bag range, which she hopes, provides a signature style that is witty, purposeful and un-apologetic.

Throughout her career Erin has observed and been observed and she has also discovered the power of developing her own individual voice. It has been important to her over the years to respectfully communicate her viewpoints and opinions and has written for The Times, i-D magazine, The Guardian, The Evening Standard and Stylist Magazine. In addition to this she has written her own blog for Vogue online and appeared alongside British supermodel Naomi Campbell in the TV programme The Face UK.

Erin wrote and presented a documentary on fashion, Erin's Model World, for BBC Radio 4 and has appeared as a mentor and judge on the Irish reality TV series The Model Agent for RTÉ Two. She also she appeared in the acclaimed Channel 4 series in 2002, This Model Life. 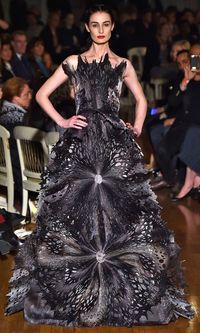 Forever busy, Erin also features in the haute couture seasons, working with names including Jean Paul Gaultier, Valentino, Yohji Yamamoto, Giles Deacon and John Gallianoat Christian Dior. She has appeared in the Icon issue of Harpers Bazaar and was once again reunited with the renowned photographer Nick Knight for a Show Studio project in 2014 when she announced her pregnancy. For the collection of images titled "Expecting” for ShowStudio.com, Erin wanted to epitomize the essence of motherhood in all its natural beauty.

In conjunction with the Alexander McQueen 'Savage Beauty' exhibition in London, Erin gave a talk about the relationship between designer and muse and their shared history together. She also composed a series of questions for the 2015 Vogue Festival where she interviewed her dear friend Jean Paul Gaultier about his life and iconic fashion label.
​
In February 2015, she made an exciting return to the runway and opened the Marc Jacobs A/W 2015 show. From there, she reunited with her close friend Giles Deacon and walked in his show during London Fashion Week and most recently, she has appeared on the cover of Italian Vogue photographed by Steven Meisel and Love Magazine photographed by Sølve Sundsbø.