<
>
Doireann Garrihy is a Radio and TV Broadcaster. She presents 2FM Breakfast with Doireann, Donncha and Carl on RTÉ 2FM alongside Donncha O'Callaghan and Carl Mullan. In December 2021, Doireann presented ‘Big Night In’ on RTÉ One alongside co-host Dermot Whelan. The very well received show included laugh out loud celebrity pranks, nail biting studio games, audience surprises and a Christmas stocking full of other treats. Her TV show, The Doireann Project has aired on the RTÉ Player and RTÉ Two and the show features a number of impressions of both well-known names across Ireland as well as characters we regularly meet every day. Season two of The Doireann Project returned to our screens on the RTÉ Player in September 2019. As well as that, Doireann hosted The Podge and Rodge Show on RTÉ where the doors of Ballydung Manor had truly been open once again! In 2019, Doireann launched her podcast called 'The Laughs Of Your Life'.
​
Doireann rose to attention across social media, becoming known for her uncanny impressions of well-known Irish bloggers and personalities and as such, has amassed a major social following. Her Instagram account boasts 286,000 followers, 68,300 Twitter followers and over 78,900 followers on Facebook.


For more information please contact: info@nkmanagement.ie orThe offer is a x2 night stay including lunch or dinner in The Stables Brasserie & Bar.
​

​​Doireann kicked off her radio career with AA Roadwatch, reporting on both Breakfast Republic and The Eoghan McDermott Show on RTÉ 2FM. It wasn’t long before she had shown her broadcasting potential and within a year, she progressed to a full-time position in Spin 1038 as their Entertainment Reporter in May 2016. In May 2017, she joined The Zoo Crew alongside Martin Guilfoyle on Spin 1038. ​The show was a huge hit with listeners.  She also took to the hotseat on Today FM covering for Alison Curtis Weekend Breakfast. 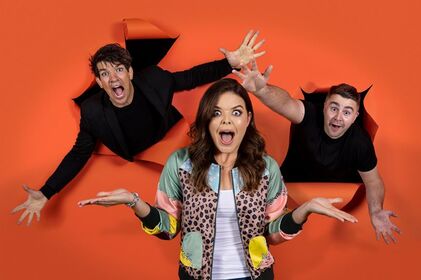 ​Doireann also worked with RTÉ at the 2017’s Ladies Day at the Dublin Horse Show where she reported on all the fashionable highlights of the day. ​​

​Doireann rose to attention across social media, becoming known for her uncanny impressions of well-known Irish bloggers and personalities and as such, has amassed a major social following. Her Instagram account boasts 284,000 followers, 68,300 Twitter followers and over 78,000 followers on Facebook. Organic reaches of the posts far surpass these figures reaching over 2 million people on some posts.

In 2017 Doireann was awarded with the Most Stylish Online Influencer Award at the Peter Mark VIP Style Awards, Best Snapchat Star at the Gossies as well as U Magazine’s 30 under 30 Rising Star Award.  ​