<
>
Aidan Power is an early riser! He presents iRadio’s breakfast show Aidan and Oonagh in the Morning, from 6.50am – 9.50am Monday - Friday. Aidan is the Sports Presenter on Weekend AM on Virgin Media One.

​He has over 20 years of experience in youth programming, light entertainment and sports television. He has worked with RTÉ for a number of shows including The Café, which he wrote and presented, Celebrity Bainisteoir, Superbloopers with Zig and Zag, The Hit and Shake Down The Town to name a few. He has also worked with the BBC and RTÉ on sports programming for the Rugby World Cup, The Heineken Cup, The Golf Open, the Olympics and more.

​Aidan has presented the RTÉ  talent show Class Act and the flagship of RTÉ's Telethon 2007, Celebrities Go Wild.  He's also presented for No Frontiers and The St. Patrick's Day Festival, reported from The Irish Golf Open and The Heineken Cup for RTÉ Sport.  Aidan joined BBC2's Sportsround team in 2007, anchoring the show and reporting live from the Rugby World Cup, In 2008, the show came live from The FA Cup final and Wimbledon.

Back in Ireland in 2008, Aidan hosted the hit show Fáilte Towers and began a year long stint at the helm of Winning Streak. Since then, he also hosted a number of other shows including Celebrity Bainisteoir, Backstage at The All Ireland Talent Show, a hip hop talent show called SuperCrew, the exciting sports and culture show called The Bulletin and Superbloopers with Zig and Zag.

​Aidan also presented The Hit where unknown songwriters sell their songs to established music stars in a bid to make it a hit. Additionally, he presented a celebrity prank show called Foul Play, and Shake Down the Town where families compete against each other in the largest treasure hunt that Ireland has ever seen. 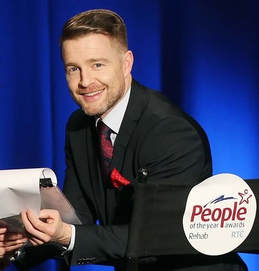 Aidan has hosted numerous live large national events including Dublin's first ever New Year countdown street party as part of NYE Dublin Festival 2013. He introduced acts such as The Coronas, former Blizzards front man and The Voice judge Bressie, Damien Dempsey, the stars of Riverdance and Imelda May. The event was attended by over 5,000 revellers and was broadcasted live for RTÉ. ​Aidan rang in 2017 by returning to the festival to report live for RTÉ.
​
Aidan co-hosted 98FM’s breakfast show The Morning Crew for two years. This show won Silver in the PPI Best Breakfast Show Category in 2011 and 2012. On RTÉ 2FM, ​Aidan has filled in for Breakfast Republic, Eoghan McDermott, Will Leahy, Weekenders and the Olympic Games.